Frost can cause damage to trees and shrubs in the winter. It typically occurs from November through March. Frost can form when temperatures fall below 32°F. Frost damages plants by turning tender, water-conducting tissues into ice. When frost damages a plant, it is known as frost damage. When the frost has been an issue for several years in a row, it may be necessary to replace certain damaged plants. Frost damage will not affect all of your plants equally. Some specimens are more delicate than others. Learn how to protect your trees and shrubs from frost damage this winter.

To protect trees and shrubs against frost damage, remove dead or diseased limbs promptly. Make sure that you prune them at least 6 inches back from where they branch off of the main stem. If you are pruning an evergreen, be especially careful not to damage the bark near the ground line.

Next, clear away any debris that may have collected at the base of your plants’ trunks or branches since frost can form even before temperatures reach 32°F.

Finally, wrap especially fragile trees and shrubs in burlap, insulating material, or a frost blanket. This will provide great protection from frost damage that may occur.

What Time Of Year Does Frost Occur?

Frost typically forms on cold, clear nights during the early winter months and again in mid-winter as temperatures drop below freezing. A few frosty mornings can also occur in very late fall after a long spell of clear weather. Although, frost is less common then than it is at other times during colder months.

Soil conditions do not affect frost formation directly. However, they do play a role by impacting air temperature near plants’ roots.

Tips To Avoid Frost Damage Before It Happens

To minimize frost damage this winter, plant frost-tender plants such as citrus and subtropical in frost-free areas or provide frost protection, such as a frost blanket or other type of weatherproof covering.

In frost-prone areas, certain trees and shrubs are more susceptible to frost damage than others. For example, creeping figs can be damaged by low temperatures whereas plants like roses require a temperature below 17°F before they will suffer any damage from frost. Frost damage to shrubs is more common than to trees. This is because the bark on a tree is thicker and not as vulnerable to frost. However, frost can still cause problems for even the thickest tree bark.

The best way to protect trees and shrubs against frost is to keep them growing during the winter months. They will develop strong root systems that will allow them to withstand cold temperatures.

Be especially vigilant during frosty periods in late fall and through winter. Keep your trees healthy by pruning them regularly, watering them during dry spells, and feeding with a fertilizer designed for fruit or evergreen trees. Make sure you keep an eye out for diseases that may harm young branches or leaves.

In cold temperate climates, frost damage is caused by the expansion of water molecules converting from a solid to a liquid state. The ice crystals formed have a lower density than the surrounding fluid. This causes them to remain at the surface, causing damage as they expand.

Frost damage can lead to frost heave. This is an upward movement of soil caused by the expansion of freezing water. This exerts pressure on weak soil structures or plants with shallow roots.

In dry climates, frost can cause frost pocketing. This is where cold air remains trapped in depressions in the land due to geographical features such as valleys or mountains covered with snow. Thus preventing it from draining away into higher ground.

There are various ways that you can help protect trees from frost. When temperatures reach near freezing, cover young growth with frost blankets. These are special blankets that are lightweight quilts and come in various sizes that are specifically designed for protecting plants against frost damage.

You should remove old leaves before winter sets in to allow the sun to warm up the tree’s trunk. By pruning off frost-damaged branches and cutting back frost-damaged leaves, you will help to prevent further frost damage. Also, never remove more than 25 percent of a tree’s canopy in one season.

When frost damage does occur on trees the first sign of frost is often blackened leaves that later turn brittle and brown or gray. If frost damage occurs on young stems or branches frost can cause them to die back. However, frost rarely kills mature trees so long as the base of the tree remains healthy.

Different Types Of Wraps And Coverings For Trees

There are several different types of wraps to protect your trees and shrubs from frost.

Roll out a plastic tarp, measuring it so that it completely covers your tree. Make sure you remove the tarp during the second half of winter when frost threats decrease.

Wrap burlap around the trunk of your tree. Check for frost damage and adjust as needed. For shrubs, lay burlap over your plant and secure it tightly around the trunk. Remove the burlap during the second half of winter.

Lay a sheet of plastic over the top of your plant and secure it with stakes. Only cover walking paths if need be so that you can still walk through.

It’s also important to water frost-sensitive plants during frost, as frost can suck the moisture out of plant material. The best way to do this is to create a frost pocket at least two days before frost. Remove all dead or frost-damaged leaves from your plant then dig a hole around the base of the tree about one foot deep and fill it with water. As temperatures drop overnight this frost pocket will give off enough heat to protect the plant from frost damage. How do you protect specific types of plants from frost? Here are some tips.

Frost can have a devastating effect on banana trees, especially if you’re growing them in cold areas. Banana tree frost damage can be avoided by covering the plant with a frost blanket or simply wrapping it up well.

Frost is potentially damaging for palm trees as they are particularly vulnerable to cold temperatures. Protecting palm trees from frost involves covering palms with frost blankets and fabric covers before the temperature drops below 17°F.

If you’ve got jasmine plants, either potted ones indoors or those outside your house, you should take steps to protect them against frost damage during colder periods of the year. Even though jasmines are frost-hardy, frost damage is still possible even in areas that don’t normally experience frost.

These small plants are particularly sensitive to frost damage. Water your plants frequently but do not overwater them. Excess water can lead to frost damage as ice.

This has a lower density than water, will form at the base of ice-laden plants. In early spring, any frost damage will have been repaired and new growth should emerge from damaged tissues after all danger of frost has passed.

Frost is likely to kill the top growth of your fruit and vegetable plants. It is important to take steps to protect both the plant itself and the surrounding soil from frost. Covering your plant with either frost blankets or fabric covers before the temperature drops below 17°F will help insulate the plant from frost damage.

In addition, by removing all weeds around your plants, you can also ensure that frost doesn’t permeate too deep into the earth where it could harm root growth.

Another method to protecting produce is using a freeze-frame is a method of protecting fruit crops against frost by freezing them in a block of ice so that they survive until warmer temperatures arrive.

What To Do If Frost Damage Occurs

It is always best to protect against frost damage during colder months by covering frost-vulnerable plants with frost blankets, fabric covers, or by simply wrapping them up well! There are different ways to protect plants depending on if they live outdoors or indoors.

When frost damage does occur on outdoor plants, clearing away as much frost as possible is an effective way to give frosted plants a second chance. Remove frost with a metal spatula and then place the plant in direct sunlight for at least an hour before watering it.

If frost has damaged just one branch of your plant you should prune off the frosted branch and cut back any leaves that have frost damage on them regularly.

When treating frost damage on indoor plants, make sure you keep misting one of two ways. You can either use a spray bottle set to fine mist and water daily. This will both help prevent further frost damage and stop existing frost from hardening.

Or you can fill a tray with lukewarm (not hot) water, place the frost-affected plant in the tray and cover it with a plastic bag. If frost remains on your houseplants once it has melted off of outdoor plants or shrubs you should cut back any frost-damaged leaves, branches, or stems to avoid further frost damage.

After Frost & Getting Ready For Spring

It is best to protect your plants during winter. This not only helps them survive the cold and frost but also prepares them for spring!

Frost damage on trees and shrubs is common, but frost does not always kill a tree or shrub. Frost damage will not impact the plant’s growth in the spring. Some plants may lose their leaves, but new ones will grow in spring. You should see signs of fresh growth and flowers before other leaves appear on your tree or shrub.

If you follow these tips and put some effort in during the cold, you should have beautiful blossoms and blooms in the spring! 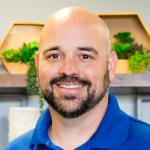